TAI recently visited the Bay Area to join UC Berkeley’s Center for Effective Government Action for an event on “Smart Government: Harnessing Technology for Public Good.” Since we see open data as a powerful ingredient towards government accountability, the symposium was a unique opportunity to hear how citizens and governments around the world use innovations in tech to this end. Our executive director, Michael Jarvis, moderated a panel on citizen-focused innovations and the Hewlett Foundation’s David Sasaki shared some of the learning questions donors are grappling with in the tech and governance space. The day’s cutting-edge discussions provided TAI with insight on specific ways technology can bridge the information gap between citizens and their governments. Check out a recap of the event from Devex below!

A slide titled “The last few years in Brazil … ” featured a picture of a frowning Dilma Rousseff, the former president of the country, who was impeached and removed from office, surrounded by five men in handcuffs.

“It’s not like corruption is an anomaly that shows up here and there,” said Thiago Marzagao, a data scientist from the Office of the Comptroller General in Brazil, before detailing an app he and his team have created that demonstrates the probability of a civil servant being corrupt.

Marzagao was speaking at the “Smart Government: Harnessing Technology for Public Good” conference in San Francisco on Wednesday, where artificial intelligence was just one example of technologies on display aiming to empower citizens and transform governments. Automation plays a critical role when a task is too vast for humans to take on, Marzagao said, in a presentation on the opportunities and limits of machine learning in fighting corruption. “Corruption is part of the DNA of the political system in Brazil,” he added.

The meeting was the eighth annual Evidence 2 Action symposium, which convenes researchers, practitioners and policymakers for evidence-based presentations on the impact of technology on global development. The focus on “GovTech” and “CivicTech” comes at a time of growing interest in the role of technology and big data in facilitating citizen engagement and improving public sector accountability.

“Clearly Silicon Valley and the tech sector play a big role in interaction between governments and citizens,” said Temina Madon, executive director of the Center for Effective Global Action, a hub for global development research based at the University of California, Berkeley. “What we want to explore here today is how technology changes the way governments and citizens interact.”

CEGA has a network of 70 researchers who are defining big problems, identifying and testing solutions, then synthesizing those results and supporting scale-up. Many of them are increasingly looking at the challenges inherent in the relationship between governments and citizens. For example, because elections happen infrequently, and citizens lack other ways to provide meaningful feedback to governments, this can limit government accountability. But advances in data collection and their increased use by the public sector, as well as the proliferation of online platforms for citizen engagement, present new opportunities for technology to make an impact.

Presentations at the conference spanned topics and geographies, from how sensor technology is making taxis safer in Nairobi, Kenya, to Chinese censorship, to computer-assisted learning for students in Delhi, India.

Katherine Casey, an assistant professor of political economy at Stanford Graduate School of Business, talked about her work in Sierra Leone, where mass media has a limited reach, restricting knowledge of government. She organized a roadshow that brought villagers together for projected video debates among candidates for parliament. Providing voters with more information about candidates creates conditions that allow for the election of better leaders, she said.

Meanwhile, Arman Razaee, an assistant professor of economics at University of California, Davis, spoke about his work to develop a mobile phone-based platform crowdsourcing ratings of vets in Pakistan in order to improve the artificial insemination of cows — a service that is important to the livelihoods of people across the developing world, but often suffers from poor provision. Razaee said the elements that drove the success of his work — crowdsourcing data collection; keeping information collection and transmission short and simple; and making sure the key information was objective — connected it to other projects.

“Getting people to do cheap and easy things with ICT is straightforward,” said Craig McIntosh, a professor of economics at UC San Diego, giving a presentation on using technology to promote electoral participation in South Africa. But “having that translate into real world political activity is substantially more challenging.”

Panelists said that while randomized control trials, or RCTs, provide better roadmaps for understanding what works and what doesn’t, they are not always helpful, and sometimes even harmful.

“What’s lacking still, and that is the learning agenda I think we have ahead of us, is how do we translate RCTs happening by definition in a controlled environment of some sort, or not at scale, into actual programs that work for governments?” said Katrin Verclas, a long-time leader in the nonprofit sector.

She has spent the last four years working on that challenge, and said the results are mixed. The jury is still out on the question of how to take RCTs beyond experiments in order to solve real problems with “CivicTech” and “GovTech.”

The event was linked to Economic Development and Institutions, a program supported by Britain’s Department for International Development, as part of which CEGA is funding randomized evaluations to test key institutional reforms in partnership with governments and civil society groups in sub-Saharan Africa and Asia.

While the researchers often zoomed in on individual research projects, audience members also zoomed out with broader questions and comments, in an effort to identify the lessons that cut across projects and how they might be scaled.

“Not everyone is designing for scale at the outset in their research, which I think is a real problem, because it becomes prohibitively expensive later on if you don’t,” said Erica Kochi, co-founder of the UNICEF Innovation Unit and co-chair of the World Economic Forum’s Global Future Council on Human Rights.

The whole point of the collaborative — which includes the Omidyar Network, Open Society Foundations, Ford Foundation, William & Flora Hewlett Foundation and DfID — is to become smarter funders, he said, calling events such as these valuable in bringing more of an evidence-based approach to their funding. He noted the open government movement that has arisen in the last five years, and mentioned the Open Government Partnership as one example of the kinds of developments the Transparency and Accountability Initiative is glad to see. But these developments mean little without connections back to the local level — things that citizens actually care about and are motivated to engage with. Funders need to pay more attention to the participation element, he said.

Three things the funder community has learned, said David Sasaki, a program officer at the William and Flora Hewlett Foundation, are that lowering the transaction costs for citizen participation is not enough to give real people real political power; that transparency in itself is not beneficial unless it is targeted and actionable; and that indexes do not address problems. 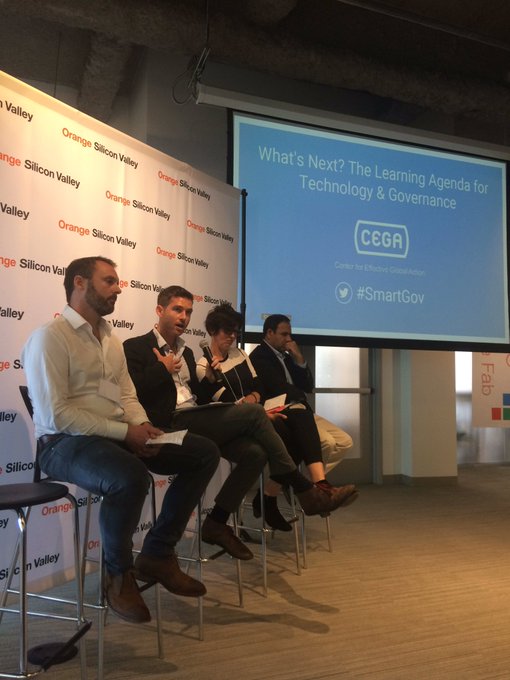 The unanswered research questions, Sasaki said, are going beyond just counting who shows up and instead determining how that translates to power and influence, engaging social media companies to improve democracy, and making tweaks to the feedback loops so that citizens participate in a way that policymakers respond.

While private philanthropy cannot do anything that can be interpreted as having an influence on elections, given electioneering laws, it can facilitate partnerships between academia, policymakers, the private sector and civil society organizations, Sasaki said.

“There are a couple of reasons for pause,” Madon of CEGA told Devex, reflecting on the event. “One is that we need to think about the potential for bias and abuse with any new technology. Algorithms and automation can perpetuate inequality.”

She also referenced comments from the event on the need for innovation capacity within governments to support technology-enabled reforms.

“You can’t introduce durable tech solutions without understanding institutions and their political economy,” she said.

Participatory Budgeting: Step to Building Active Citizenship or a Distraction from Democratic Backsliding?
By David Sasaki