Why only a day, not every day?

If coverage in the TAI Weekly is any indicator of shifts in the field, it seems that gender is finally getting more serious attention in 2019.  In recent issues, we’ve talked of efforts to both add gender considerations to data and to strengthen women’s participation – be it in multi-stakeholder initiatives or the staffing of tax authorities. We have further developments in both categories this week, building on last Friday’s International Women’s Day celebrations #IWD2019. (Want to know the 100+ year history of IWD and its roots in the actions of a Ukrainian born activist in New York? Olivia Petter has the answers).

First up, could gender-responsive contracting be the next trend in public procurement? Hera Hussain kicks off a series of blogs making a case for gender-smart approaches, starting with addressing imbalances in women-run businesses winning government contracts. If Open Government Partnership member countries could make such measures it would be greatly welcomed by a secretariat and leadership seeking to be strategic in how it brings women and girls into the co-creation process.

Of course, to know if women-owned businesses are winning more business, you need gender-disaggregated data and that’s been a gap on so many fronts, though in Mexico at least there are hopes to change that. Sylvia Gabriela Andrade and Mayra Buvinic make a case for how gender disaggregated data yields improvements in shrinking the financial access gender gap.

With more detailed data, not just on gender but a whole host of identifiers, in the hands of governments and corporations, debates on how to govern the data continue to hot up. How can we reduce data abuses while ensuring maximum public and private benefit? Geoff Mulgan advises that we need to experiment with a variety of solutions as we look to build a new ecosystem of trust. (Making sure women are equally involved in the design and testing would help).

Keen to understand a culture of data privacy at your non-profit? Check out some tips from Giles Watkins on how to create a data privacy policy. 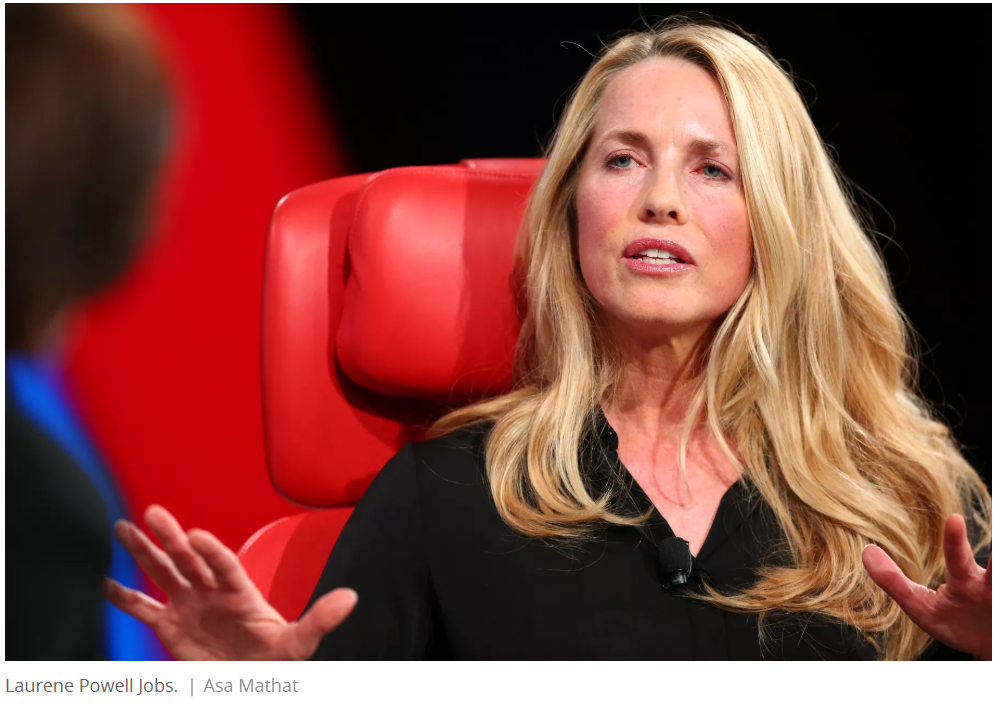 Laurene Powell Jobs talks about her investment in non-profit media, driven by her distaste for the balkanization and polarization of news, which she argues denies readers from finding relevance in local news, and puts democracy at risk. Listen here in Recode Decode.

Are you part of the in-crowd?

Peer pressure can be a powerful tool for social change. As anti-corruption efforts are increasingly trying to target underlying social norms, opportunities for intervention may be found within individuals’ personal groups and those groups’ mutual expectations. Cheyanne Scharbatke-Church and Diana Chigas address these issues and emphasize the importance of asking ‘who is in this group?’ when considering how to shift corruption behaviors.

Elsewhere, OGP has signed a Memorandum of Understanding with UNDP in which they reaffirm their joint commitment to advance the 2030 Agenda for Sustainable Development through open government initiatives. While Open Contracting Partnership has unveiled a full draft of their new strategy 2019-2023 for public comments.

Talking of public comments, we are feeling a warm glow at the fact that TAIers are not the only tax geeks out there. The OECD has the unenviable task of wading through around 950,000 words of comments on their landmark paper on digitalization of tax (thanks, Rasmus Christensen for the estimate). What’s more, there is the opportunity to watch further comments made in person this week on OECD TV (who knew!).

If that’s not enough, you can now wade through another important paper – this time from the IMF. It highlights the shortcomings of current international tax arrangements and works its way through several alternatives. Perhaps, no surprise that there was no consensus among IMF Directors on their relative merits, but a shared ask for more analysis. Either way, changes are a coming.

And one organization who may help implement those changes is Tax Inspectors Without Borders (TIWB), an OECD- and UN-backed initiative. In a recent case in Jamaica, TIWB worked with Tax Administration Jamaica, the national tax authority, to implement new laws regulating cross-border transfer pricing. Overall, TIWB claim a great return on its investment, increasing revenue by $100 for every $1 spent on its programs, according to its head.

Another worry on IMF minds is the race to the bottom on tax rates. In a timely release, Didier Jacobs argues for the need to turn from tax competition to tax cooperation. Governments need to work together and set a floor under corporate tax rates and adopt a joint mechanism to monitor tax incentives. (Part of our ongoing Fiscal Futures series with International Budget Partnership and Carnegie Endowment). Didier may find further motivation from Denmark as the Finance minister supports the global adoption of a minimum tax on multinational group profits and a common corporate tax base.

You can be sure multinational companies are watching all this closely. Might more of them seek to get ahead of public opinion on this issue? The experience of B Team member companies could encourage them as they reflect on the year since the launch of their Responsible Tax Principles. They see progress in making the case for responsible tax to no longer be the exception but an expectation for companies, consumers and employees.

The B Team have also been pioneers in improving beneficial ownership standards, and we’re seeing progress on that front in other parts of the world. Some key three takeaways from Kyrgyz Republic on implementing beneficial ownership transparency – think about the data early on, verification is important, and coordinate and collaborate.

In our last Weekly, we highlighted how the Financial Action Task Force (FATF) criticized the EU money laundering blacklist of 23 countries citing it undermines their work. Despite the criticism the EU is set to broaden its tax haven blacklist – have added 10 jurisdictions to a draft blacklist including the United Arab Emirates (UAE) and Bermuda. We will be intrigued as to FATF’s reaction.

While a lot of money might sit in those 33 jurisdictions, that doesn’t mean the owners of that wealth actually live there. Where do they reside? This map shows us (Are we the only ones surprised to see so many in Auckland?). Is anyone up for adding a layer showing where those high net worth individuals actually pay tax?

When is repressed not repressed?

Definitions of closing space vary depending on your starting point. While CIVICUS says civil society is repressed in Colombia and Mauritania, the Extractive Industries Transparency Initiative (EITI) validation reports find that space for civil society engagement in those countries is “satisfactory.” The EITI gauges civil society openness in the extractives sector specifically, not as a whole. This can lead to wide disparities – can one sector keep space open, or does it risk becoming a fig leaf?

Meanwhile, despite concerns within EU borders, members of the European Parliament have urged the Indian government to create a more open civil society space. More examples of meaningful dialogue and collaboration between government and civil society at the national and local level might help foster positive steps. Even modest citizen accomplishments merit celebration, as in Mexico, on issues of transparency in public works and the opening up of local municipal council meetings to citizen participation.

Perhaps those who led movements in the 1960s will not be surprised, but it seems songs are threatening to those in power. A couple of weeks ago, we referenced a popular Nepali folk singer forced to pull an anti-corruption song from YouTube. This week, in Indonesia, Amnesty board member and human rights defender, Robertus Robet was arrested for singing a song meant as a criticism of the government’s recent plan to move unemployed military generals into civil institutions to address an institutional surplus. We’ve also enjoyed reading about the power of music (and hashtags) in safeguarding Gambian democracy. Learn more on the Open Mic Festival and its role in spreading #GambiaHasDecided.

As a collaborative ourselves, we know that partnering is not without its tensions even among donors alone. Add evaluators and intermediaries to the mix and things getting more complex still. How to effectively bring these partners together and position them for shared success? Start by navigating and overcoming common partnership tensions and find more tips in the report from Equal Measure, Harder+Company Community Research, and Engage R+D.

Keen to understand and explain how M&E systems operate in organizations and complex programmes? And how information and analyses can be summarised across large portfolios of work?  Check out Intrac for Civil Society’s report.

Sticking with the theme, check out a new training manual from the peacebuilding sector on program design, monitoring, and evaluation. Those concerned about working in conflict-affected settings might also want to dig into a new World Bank comparative analysis of public service reforms in post-conflict countries. Among the main messages for donors – building on prevailing values can be a powerful source of legitimacy, negotiate pragmatically (public jobs are a political currency for buying peace), and recognize decisions influenced by immediate needs all too often shape long term trajectories.

Are you on the board of a non-profit? Have you experienced a non-profit closing? What are some of the issues that can lead to its closure? Courtney E. Martin explains how tensions between the mission, scale, and funding can lead to closure.

Take part in the 2019 State of Grantseeking™ survey of nonprofit organizations, educational institutions, grant writers, and government entities.  This will help to reveal the current state of grant seeking in the United States and the world.

Building a shared vision for South Africa | Luminate
Luminate explains why they invested in the Big Debate, the only nationally-broadcast live show on difficult conversations on important issues in South Africa.